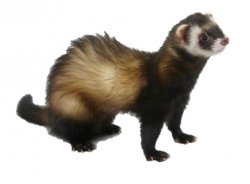 Marshall has been raising ferrets since 1939. The company founder, Gilman Marshall, began raising ferrets as a hobby for hunting, and also sold them as pets. It was later realized that ferrets also proved to be a valuable model in the development of canine distemper vaccines. Since then, the domestic ferret has become recognized as a valuable model for several areas of biomedical research including: neuroscience, myocardial infarction, cystic fibrosis, to evaluate emesis response, and most notably, influenza vaccine development.

Both colonies are maintained in similar barrier environments, with strict biosecurity measures, allowing us to provide high quality ferrets globally.

We continue to monitor our colonies regularly for the recent strains of influenza, and they are free of clinical and sub-clinical infection of most pathogens including coccidia, giardia, and otodectes cynotis (ear mites).